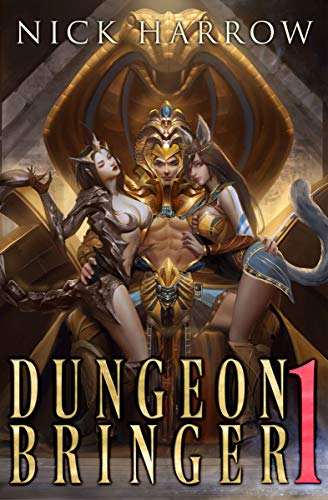 Note from OOTWReviews: The edition reviewed is the aduiobook, narrated by James Patrick Cronin, and as such some of the points in this review will not apply to the print version.

This time I’ve listened to the audiobook of Dungeon Bringer by Nick Harrow, narrated by James Patrick Cronin. I will review the book by itself, then add my impression of the narrating at the end, and lastly, give a score that mostly is the book, but the narrating will weigh enough to influence the final score.

This book is quite an interesting “read” (not sure what you call it with audiobooks… listen?) and it’s definitely a… special book.

The story is most certainly not for everyone, but luckily, I’m one of those odd people not included in that “everyone.”

The book is heavy on fan service and wish-fulfillment, especially aiming towards men. It contains a lot of hot monster girls (for those who think it sounds weird, monster girls have their focus on the girl part, rather than the monster part), sex, and a main character/reader insert that’s both strong, smart, witty, and receives all love from these monster girls.

All of this is essentially what the stereotypical LitRPG is, however, so it is to be expected.

This kind of book is, as mentioned, not for everyone, but it is the kind of book that I like, on occasion, e.g. when I just want to let loose and read about a badass that kicks ass and gets the girl, but it’s not a book I’d recommend to readers who prefer a more “clean” reading experience.

Dungeon Bringer is a great book, for being a LitRPG. LitRPG has, as mentioned, an unfavorable image to outsiders, and some of the criticism it receives is not completely off, which is why I say “for a LitRPG”.

Nevertheless, if you like Isekai, LitRPG (#TKTK), or any similar genre, then you should definitivt give it a shot! Either in print or audiobook format.

Speaking of it being an audiobook:

Cronin does a good job narrating this story in my opinion. He is pleasant to listen to and he “voice acts” quite well, for the most part. The only real complaints I have are that he gives the catwomen a strange French-like accent, which I found annoying at times, and that he occasionally forgot to keep acting, and therefore lost a bit of the feeling he had built up until then, he still did a good job though.

Overall, great story (if you like the generic LitRPG formula) and good narrator. I give the story by itself a 7/10, but weighing in the narrating, I’ll give it a 6/10, as the weird french accent put water on my flames.