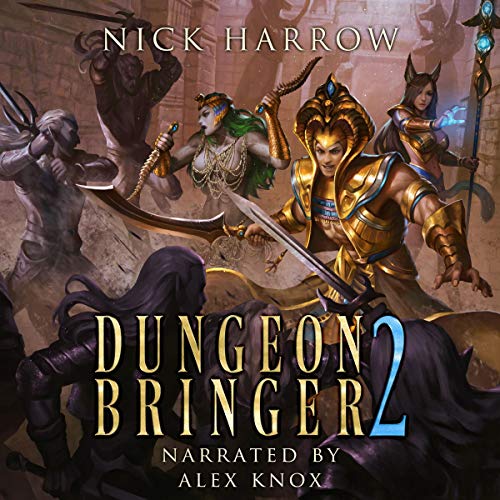 Note from OOTWReviews: The edition reviewed is the aduiobook, narrated by Alex Knox, and as such some of the points in this review will not apply to the print version.

So, yeah. I listened to the second part of Nick Harrow’s Dungeon Bringer.

Now, with that intro, no, I didn’t dislike the second part. It was… good. It was simply more of what we got in volume one; monster girls, action, and sex. Standard LitRPG wish-fulfillment.

Just like I said in my review of volume one: this book is most certainly not for everyone. That said, if you did but this book, you probably liked the first one and the tropes will most likely not turn you off, so I won’t go over that anymore. Let’s just talk about the book from the perspective of someone who likes these books.

As I said, this is simply more of what you got in volume one. It follows the same formula: Clay and his harem have a jolly old time, some new dungeon lord attacks, and the rest of the book is them fighting that dungeon lord. It’s simple. It’s fun.

Harrow does some character development, especially for the dark elf of the harem, as well as for the wakets (the Catgirls), which is good. He also delves a bit more into the worldbuilding, expanding its history as well as building on the multiverse and the dungeon lords.

I never complain about good worldbuilding, and generic as it is, Harrow still does it well without annoying info dumps.

Something Harrow could do without, though, are the witty comebacks and sex jokes. They’re just not as good the 100th time you hear them.

It’s the same narrator as in volume one, and his work is about the same.

To conclude, like it’s predecessor, it’s good, but nothing amazing. If you enjoyed volume one, you’ll probably like this one as well.

I’d like to give the story and the narration a 6 and a 5 respectively, combining into a 6/10 total.